skip to main | skip to sidebar

I have a lot of people ask me what I'm working on. I do a lot of different things. A lot of people don't know what I do, so I've decide to begin posting more info about work. Well, there are several reasons I'm posting more about work, not the least of which is that, if you've followed this blog up until now, you might think all I work on are nude photo shoots and bad action movies. Not so. I wrote about those because they are the aberrations, the side trips, the Vegas vacations of my work as an arteest. Yes, fun. No, not my bread and butter or focus.

There is a colleague named Andrew for whom I've worked the past five years ( yes, he's naked on his website ). He is an exceptionally talented Creative Director and Producer, and the brother of Bella. To me they are the Wonder Twins of the Chicago creative community. Bella has become a powerhouse in Chicago Comedy, and Andrew has become a powerhouse in the Chicago non-profit community and events industry.

Now, when I say non-profit I'm not talking about raising subscription rates at small theater (which I'm all for). I'm talking about more substantial endeavors. He was the creative force behind the Chicago's 2016 Olympic bid Millennium Park celebratory event "Chicago Believes, which raised $12 million for the city's bid effort; he created an exceptional event for IIT in the historic Crown Hall on the IIT campus ( which I art directed and for which my primary scenic element was honored by being installed permanently on campus... ahem...); and he's worked for over a year with the amazing global environmental group Conservation International, which brings me to my current project.

Conservation International is an environmental advocacy organization with amazing diversity and scope of mission. They work with major business leaders, politicians, governments and financial institutions around the world, in their quest to "safeguard valuable species, preserve the most important landscapes and seascapes, and support communities that care for and rely on Earth's natural resources." They aren't activists making bold, rash statements. They are scientists, business people, artists, educators, working with great thoughtfulness and innovation. Really a great group.

Andrew and I are working on our 3rd fundraising event for C.I. (his 6th) which will be presented in Seattle this coming week. The design of the staging plays off a new campaign of C.I. called "Lost There, Felt Here", and utilizes a concept of the empty space surrounded by lush greenery. I've enhanced the greenery motif further with the inclusion of green umbrellas – metaphors for protective canopies (i.e. rainforest) and a nod to Seattle weather and their "bumbershoots".

I'm painting the umbrellas myself and will have to haul them with me on the plane. I'm very excited to see them all in place and lit. 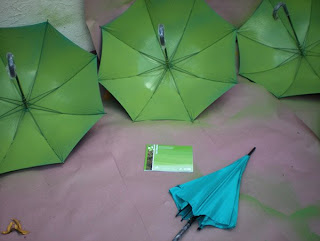 You are brilliant*
The idea,
the concept and design,
the umbrella metaphors...

Brett A. Snodgrass
Los Angeles, CA, United States
I do a lot of things. They are (almost) all art. I make paintings. I am a production designer for film and television. I design scenery for theater. I direct video. I act. I write. I do things that people call "graphics". I make pictures of characters. Gun for hire - and by "gun" I mean a pencil, my Wacom tablet and my computer. I don't do websites. I thrive when creating or enhancing strong narratives.